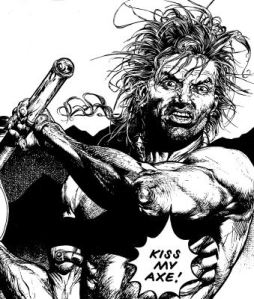 “Well, fuck.” Minozh leaned against the rock wall. Even in the shade, the stone burned through his shirt. His head pounded in heavy counterpoint with his stuttering heart. Impossible colors swirled across his eyes, sickening as they swooped and distorted his vision. Trying to reduce the next day grogginess, he’d halved his dose of Morpheus powders last night. That particular experiment was a spectacular failure. Half a dose meant that you still dreamed. And the sleeping draught ensured that while in the grips of a particularly gruesome nightmare, you couldn’t scream yourself awake. On the plus side, he could tell that that the symptoms were lessening. It was just going to be an extremely long and hard day. In spite of himself, Minozh chuckled. A night of drinking with dwarves produced much the same effect.

“Oy! You lot! Get yer gear together. I’m about to start casting.” Even from 35 feet away, Tim’s voice grated on Minozh’s eardrums. He watched the rest of the camp begin to get ready for the continuation of their journey. The natives, especially that large tattooed fellow, moved quickly about their tasks.

The batras brayed irritation as Galen moved down their row. He was tying blindfolds around their heads. For someone who put on the airs of a green-skinned dandy, he moved with a precise grace. Military training there, Minozh thought. Without realizing he did so, he rubbed a handful of red sand against his left arm, scraping the skin off in shallow arcs. The scars there throbbed and itched.

He pushed himself off the rocks and rose to gather his stuff. Fortunately, it wouldn’t take him very long. He didn’t have much. Eyes still tearing, he made his way back towards the rest of the camp.

Tim watched as Minozh made his way back towards the camp. He’d been keeping an eye on his old friend, waiting to see if today was the day he went berserk. What is that silly blighter doing, he wondered when Minozh picked up a handful of the gritty sand. Face dreamy and faraway, Minozh rubbed it against the interwoven scars that twisted around his arm. Tim decided that calling attention to it would only make things worse. To his mage’s sight, those scars glowed with the sullen red and black of tainted magic. The valley elf was close to snapping, he knew. There was only so much sanity to go around Minozh’s head on a good day. The past few weeks had had precious few good days.

“SO!” he boomed. He saw Minozh wince and tried to modulate his tone a bit. “So. I am about to cast a spell; a very handy spell! With sigils and mystic passes, I’ll carve …What is it Shield-Thrust?”

“Just get on with it. Day’s wasting.”

Tim sighed. The taciturn warrior had no appreciation for the subtleties of showmanship. None.  “Right. I’m going to pull down a cloud and carve out a … a, I suppose you could call it one of your ‘windships’ from it. We’ll be able to travel in style and with speed,” he spared a glare for the Thrall, “to the Library of Jalaad.”  He ended his speech with a flourish and a smallish fireball, off to the west. He couldn’t help it.

Galen watched with a cool expression as the old mage began to chant in a high, sonorous voice. Whatever language he was using, it wasn’t one that the Lyceum taught. Neither Archaen nor Elder nor High or Low Talislantan.  Nothing that he recognized. Further, the magic that Tim commanded – powerful illusions, attack and conjuring spells – were nothing that he recognized.

At first, he had thought the old man was a charlatan of some sort. Maybe a Cryptomancer of some kind, using sleight of hand to conceal his magical runes. Time and diligence had shown that whatever the sage was doing – it worked, and often far better than his own magic.

That? Rankled. Galen Faedraught was no one’s inferior. His family’s wealth had always seen to that. The best of everything: clothing, food, women, liquor and yes, magical schooling. Indeed, he had been granted access to the Lyceum on the basis of his family’s largesse. At first, he had attended mainly out of a desire to advance his family’s standing. Magic moved everything in Cymril. As time progressed, he had begun to enjoy the studies. No one had been more surprised than he had been to find that he had a powerful natural aptitude.

The old man had reached a screeching crescendo. As Galen watched bemused, a single cloud pulled itself free from the sky and drifted down to the ground. Bits of it sloughed off on its downward journey, shaping itself into a large boat. Forgetting himself, Galen found that his mouth was hanging open. Just how in the name of all that was holy had that scraggly man done that?

“Astonishing! I don’t believe that I have ever seen anything quite like that in my not inconsiderable travels.” Dar Motas was striding toward the boat, knapsack in hand. “And you say it will hold our weight?” The sandy-skinned savant ran a dubious hand over the misty side of the vessel.

“Oh, yes. Why the power alone in making that spell work…”  Tim was once again cut off by Shield-Thrust.

“Good.”  With a grunt, the burly Thrall hefted his duffel bag and lesser sack of spears over the railing. “Time to go.”

Galen snapped his mouth shut, hoping that no one had noticed his expression. He decided that he and Tim were going to have a talk. That very evening, if he could manage it. He wanted to know just how in Oblivion Tim was able to do the things he could do. He wanted to know if those things could be taught to him. 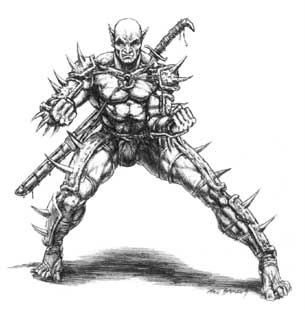 Magic users. Shield-Thrust rolled his eyes. None of them understood what a schedule was. He glanced at the sky. He knew what a cloud in the desert meant, even if these off-worlders didn’t.

“We should get moving. That cloud likely means a storm on the way. Don’t want to get caught in another, do you?”

He watched with no small amusement as they scrambled to get their gear and the animals on board. Guess they didn’t want to tangle with any more storm demons. Good. Neither did he.

“How fast are going to be going? Should our packs be strapped down? What about the batras?”

Tim stroked his graying beard, considering. “Och, I’d strap everything down for sure. We’ll be moving at quite the brisk pace. Wouldn’t hurt to hunker down, yer ownself, come to think on it.” He moved off, still muttering to himself. Shield-Thrust wondered briefly what an “African swallow” might be before shrugging. Didn’t matter.

Once everything was stowed correctly – the young Cymrillian mage was useful there – Shield-Thrust took position toward the rear of the boat. He wanted to keep an eye out for potential danger coming from that direction. The cloud ship slowly lifted off the ground and then hung there for a moment.

“What is the problem?” he shouted from his station.

“Nothing. Just orienting ourselves so that we are headed in the right direction.” Galen called back.

Shouldn’t they have done that before taking off?    Pfft. Magic users.

At last. Finally, we are making progress. Not long now, whoever you are. Not long until I lock my hands around your throat and tear the life out of you. When you try to scream? I will whisper her name. Over and over and over. You will pay.

2 thoughts on “The Thane of His Existence: The Game in Story Form”

and other excellent advice, probably.

A literary blog of poet, playwright and essayist Rachael Stanford

Don't need to be cool to be kind.

A hopeful hermit on her journey to enlightenment.